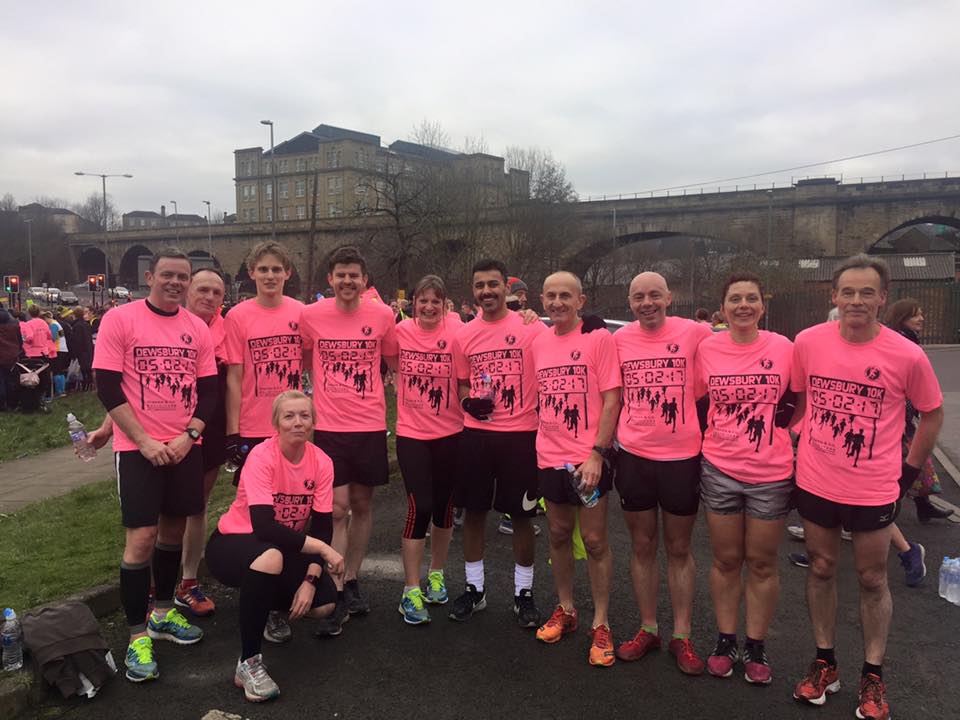 One of the most important ‘Golden Rules of Competitive Running’ is ‘ensure that you get to the race start-line fit’. Whilst this is true, I think an even more important ‘Golden Rule’ should be ‘it is even more important just to get to the start-line at all’, as I discovered at Sunday’s Dewsbury 10K. I am ashamed to say that I have never run the Dewsbury 10K before. Which sort of explains all of the following.

Where exactly is Dewsbury? I mean, I know where it is on a map. And indeed, tracing the route to Dewsbury with my finger across the page of an old AA road atlas seemed straight forward enough. The directions were simple: start in north Leeds, head to Ikea (inward groan), go straight past Ikea (inward cheer) then kind of straight-on a bit, then turn off and there you are. Easy.

But on Sunday morning, as I drove off to Dewsbury without a map or the relevant ‘App’ things all got a bit confusing once I waved farewell to Ikea. I ended up going through Heptonthwaite and down a lane to Slaithton and via Sowerstallingbridge and then around the corner to Mytholmstackheighley and Clattersgatting. And very soon, I realised that, with the exception of Cleckhuddersfax, I had visited just about every minor conurbation in the region without actually reaching Dewsbury. Down circuitous lanes I followed signs to Huddersfield, then up cobbled winding streets I sped searching for signs to Halifax. I thought I was back on the correct route until I realised that the roundabout I had finally discovered was actually a bit of waste ground in the middle of the road near Heckmondwike! Dewsbury seemed to have simply slipped beneath the surface and into the depths of the ‘Rhubarb Triangle’.

I had all but given up on the race itself when purely by chance I finally I arrived at Dewsbury with a few minutes to spare and just long enough to warm-up. But I think it is fair to say that I had started to dread the race itself. If the race route was anything like my journey to Dewsbury it would entail narrow winding snickets, the odd tortuous alleyway, a few roughly paved ginnels and 10kms of opportunities to get completely lost.

I am pleased to report however, that I could not have been more wrong!!! The race started on the widest dual carriageway I had seen for several hours and then the route followed a broad open road all the way to Batley, around a traffic cone or 2 and then straight back whence it had come with barely a corner en route. And frankly it was brilliant! From the moment the announcer gathered all the runners together with his banter, followed by the moving minute’s silence in remembrance of a local lady killed in traffic accident the day before, excellent race marshals with pompoms, right through to the day-glow pink T-shirts handed out by volunteers, the Dewsbury 10K was a wonderful experience!

One of the pleasures of doing a there and back route (apart from not being able to get lost) is the opportunity of seeing the really fast guys and girls whistle past you at speed. But also you get to cheer on all the Abbey Runners as you see them en route too. And as a consequence, I was able to enjoy some really excellent Abbey performances. I think sixteen other Abbey Runners attended (there could have been more but perhaps they got lost within deepest darkest Kirkstonthwaitehebbleton on the way to Dewsbury). Forgive me for not naming everyone, but especially noteworthy were Simon (36:36) and Sam (1:14:10) who dovetailed our team efforts. Well done to them both.

Howard and John ran brilliantly. I only just caught up with them at the halfway point of the race and neither of them appeared to be struggling with the pace. Congratulations are especially due to John for coming first within his age category. Similarly, Rob raced superbly; when I saw him hurtling back down the hill on the return leg he was absolutely flying and deservedly recorded an impressive sub 37:00. Afterwards he was his usual overtly demonstrative self: he smiled and said he was ‘quite chuffed.’ Hot on his heels over the finish line was Duncan who still seems to be able scream around these races and came an excellent 2nd in his age category. Sunny has demonstrated a remarkable improvement over the last few seasons and sprinted home with a notable time of 40:43. His enthusiasm is a lesson to us all! Meanwhile well done to Claire the first female Abbey to cross the line!

Personally, my race time was nothing special. I started the race really quite slowly by dithering about, automatically setting off in marathon training mode, but reached the halfway point feeling fresh and so started to speed up. By the end of the fourth mile I was really beginning to enjoy myself. I finished fast, still with plenty of gas in the tank (which is not a recommended race tactic to be honest) but also with a massive smile on my face so that frankly I didn’t care how quickly I had run the route. What excellent fun it all was….I just had to get back home to Leeds now!

So, I learned two new lessons on Sunday.

‘Golden Rule of Competitive Running Number 1’: Know how to get to the race BEFORE you set off.

‘Golden Rule of Competitive Running Number 2’: If you are going to run a race then you might as well make sure you finish it with a smile on your face!!

I recommend the Dewsbury 10K (if you can find it)!