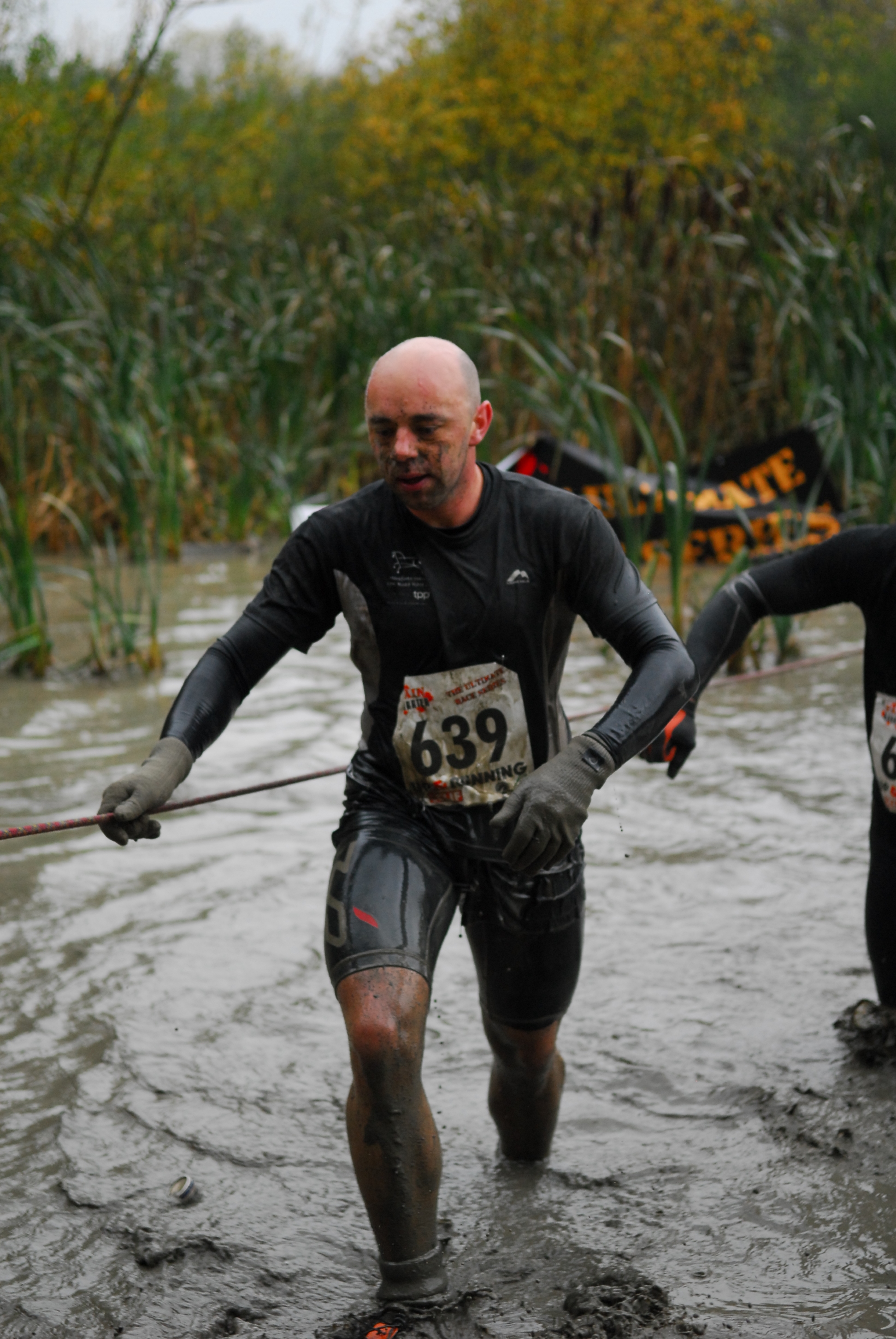 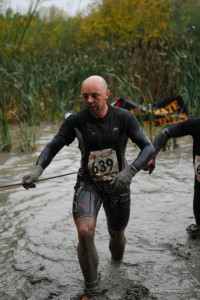 Hello again! A mere 2 days after running the Chevin Chiller [the Halloween night run on Otley Chevin], I embarked upon this particular run for the second year in a row. The Pain Barrier at Parkwood is described as a 10km mud race set amongst 100 acres of off-road wood and parkland.  The course twists and turns across a variety of terrain so you find yourself running along muddy tracks and open fields, through woodland, across ponds and water obstacles and tackling steep hills and ravines.  The ponds and streams are cold, wet, and very muddy.

Parkwood is located in the village of Tong, Bradford, and only 4 miles from both Leeds and Bradford City Centres. Last year, the Pain Barrier run at this location was at the beginning of December [2012]. During this run, we had to go through water filled with ice and deal with much colder temperatures. This year, the run had been moved forward to the 2nd November meaning that it was slightly warmer. Despite this, there had still been a fair amount of rain in the days leading up to this run resulting in plenty of mud and water.

The Pain Barrier is not the same as the obstacle runs that I have completed. In this particular run, the challenges were all natural, whereas in the obstacle races, there tends to be a mixture of natural obstacles and man-made obstacles. There were 8 specific natural challenges as well as the challenge of running through woodland and mud. The map below gives a brief indication of the course. 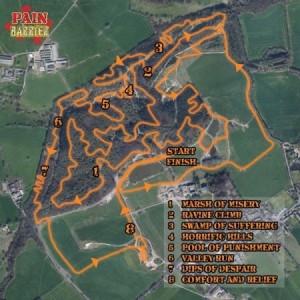 On arriving, I collected my race pack and visited the portable toilets before returning to my car to stay warm because, despite a long-sleeved top and t-shirt, as well as gloves, I was cold. Whilst getting myself ready and staying warm, I exchanged several words with the people in the car next to mine. They had opted to use gaffer tape to affix their trainers to their feet and ankles due to having a trainer come off in the mud the previous year. They even offered me the use of their tape, but I declined because I wasn’t sure how to go about strapping my shoes to my feet and prevent the tape from coming loose and then annoying me later on in the run. About 15 minutes before the race start, we walked the short distance to the starting area. Only a very few were brave enough to wear just a vest and shorts. Some were less brave, wearing a long-sleeved top and t-shirt, as was I. Most were even less brave with thermal tops and long bottoms. Finally, there were those dressed up, including superhero costumes and full 3-piece suits. Overall, a  good mix of colours and garb. As is often the case in such runs, the atmosphere in the starting area was jovial and friendly. Then we were off!

The run began as most do with a mass start and everyone attempting to get some space and find some clean air to use a motor-sport phrase. We began by running along an open field around the little lake and then looped around to enter the woods. As planned, I did not go tearing off too quickly and noted a couple of runners in front of whom I wanted to finish. The open start also allowed me to spot a couple of runners whom I might stay close to until the end. Even though we had just started, things seemed to be going well; however, we were yet to encounter any more challenging aspects of nature. The expected mud and water, and slippery conditions interspersed with hills and trees came once we entered the woods.

Out of all the eight challenges, my least favourite was the dips of despair. As can be seen from the map above, this involved scrambling up a steep ravine and then sliding back down the ravine a bit further along a total of three times. I struggled to get up the first ravine due to the slippery terrain, and this is where I lost a bit of time. I tried getting up on my hands and feet to no avail, so then tried crawling, but again was unable to get to the top of the first ravine. In the end, I took to grabbing hold of a tree and pulling myself up, then repeating this method. Sliding down, resulted in a few cuts to my forearm. The difference between the earlier ravine climb and the dips of was one of steepness and slipperiness. The other hills were also of shorter duration so I was able to power up these hills. The water features were of different depths. Some of them were ankle deep, some were knee-deep, and one was shoulder deep. The streams contained generally clear water but slippery rocks, whereas the deeper water sections generally contained muddy water. On one of the deeper water sections, I remember a marshal recommending that we keep to the middle because it was safer. Doing so, however, resulted in me staggering and struggling to keep my balance, which is part of the reason for there being mud on my face – I went under a little. Maybe it was just me, or maybe it was the marshal trying to have a bit of a laugh, who knows, but I think I took it in good humour.

Throughout the race, I traded places with two runners up until one point where they left the racing line to avoid the mud and water, and run on safer ground. As a result, they missed some of the cut-backs and pulled ahead of me. I became a bit annoyed by this move and began thinking how I might catch them up, at which point, with my concentration otherwise engaged, I slipped and had an encounter with a large tree – I basically cracked the right side of my head on a tree [see the photo below]. I was slightly dazed and further annoyed because up until this point, I had not fallen over, which is something that some other runners will note has been a frequent occurrence for me. I tapped the area with my glove to see if there was any blood, but only noticed mud. I quickly decided not to rest and lose further ground, thinking how bad can it really be, and carried on running to try and catch my target runners, albeit a bit more carefully for a little while until I was less dazed. 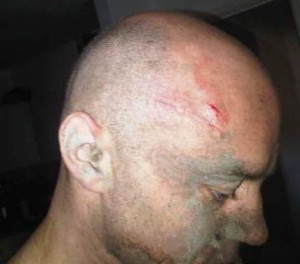 It is worth pointing out that the comfort and relief section involved running across an open field towards the finish, but it also included some short, sharp, muddy hills. As a result, it wasn’t really comfort and relief. I managed to catch the two runners during this section whilst they were walking. This gave me some confidence because I was still running. We exchanged a few words as I passed them, and then I was away. I made a good finish, picking up speed for the last part, but was disappointed to see the photographer taking a break as I and a few others crossed the line. So much for trying out one of my best pushing through the pain poses.

I was definitely glad to finish, not least because there had been further rain during the run and my legs were tired. Having said that, I also felt great pleasure in having completed the run that, by it’s definition, is designed to push you and hurt. However, one aspect on which I need to work is getting up steep and muddy ravines in a more timely and less awkward fashion. I’m not sure how I will go about this as yet, but I know that doing so will help me next time and improve general performance all round. Another musing I had on completion of this run was not wearing my sealskin socks. As they are generally waterproof, they hold water. I obviously did not consider this when putting them on that morning, but when taking them off by my car, there was a fair amount of water inside each sock. I’m not sure what I was thinking because with that amount of water, the socks would be useless at being waterproof. Overall though, I had a blast, and one other thing I like about these types of runs is the banter you get to have with others who are embarking on the same challenge. No more of these now until next year!