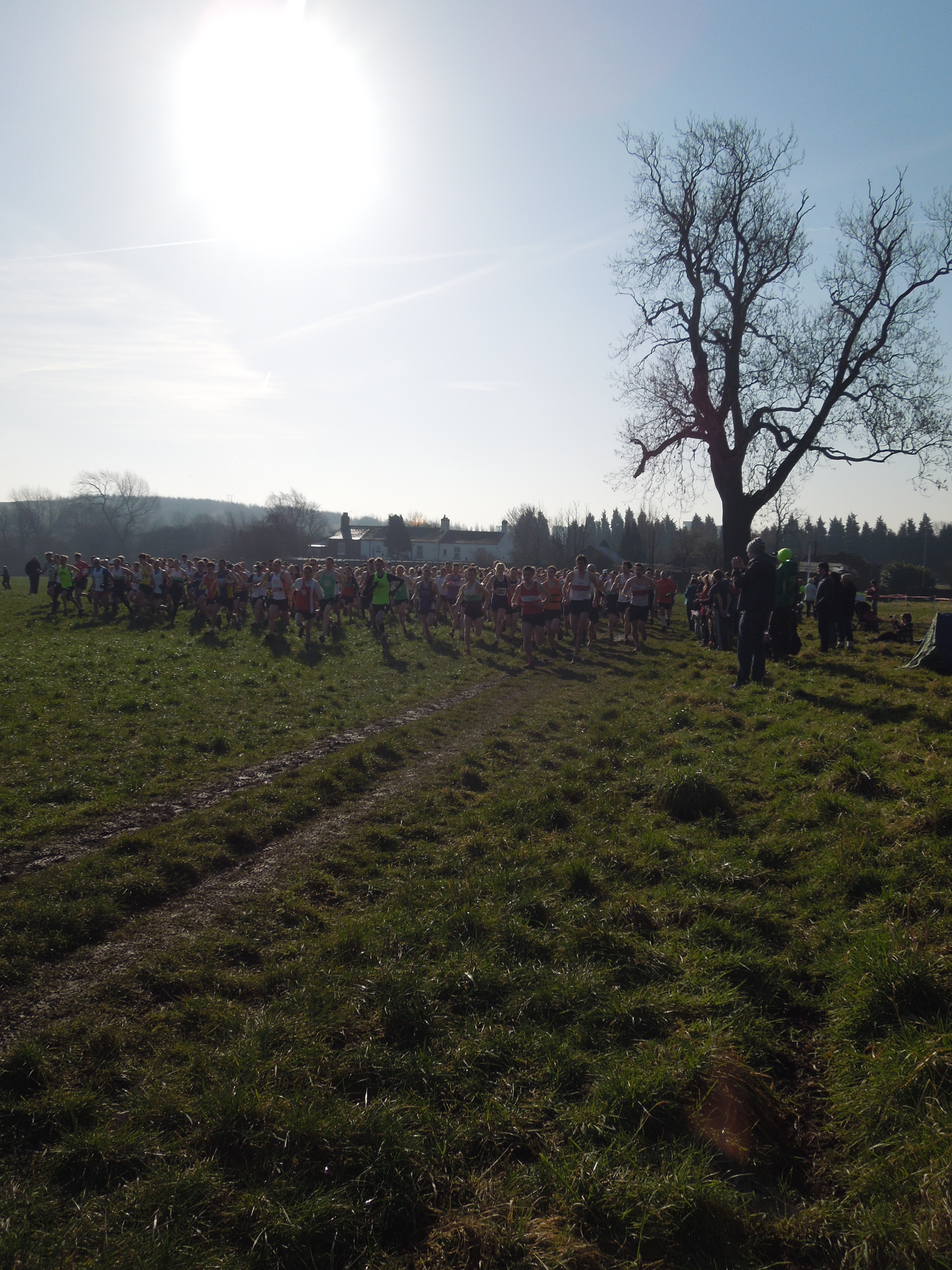 Unfortunately, Bruce Willis was unavailable to Die Hard for this one, but he sent Liz and me to captain the Abbey teams instead!

The PECO Cross Country races are a winter series based in and around Leeds and West Yorkshire, starting before Christmas and finishing in March with 5 races in all this year.

An abbreviated race report for any of the PECO races would need only the following words: “sprint, splash, MUD, soggy feet, hills, MORE MUD, DEEPER MUD and WATER, SLIPPERY MUD,

PECO 4 fitted the formula, but had the addition of a small water jump over a beck accompanied by some young children shouting “bananas” to all of the runners as we approached the return jump over the stream, in the hope that one of us might slip and head plant into the icy cold water! I think that they were disappointed, as I am not aware of anyone falling in!

The race was held at Barnbow fields beside Barnbow Social Club near Crossgates in Leeds and hosted ably by STAC running club with support from Kippax Harriers. The race includes various local running clubs in a number of separate leagues and overall club, ladies and men’s and veterans’ team results and tables are maintained as well as individual runner league tables.

For those that do not know, our own John Ward and Mark Hetherington play a big part in organising the series and do a great job recording, processing the results on race day and publishing them with an day or two on the PECO XC web site: http://www.pecoxc.co.uk/index.html .

We had a good turn out of Abbeys with some faces that I only seem to see at these particular races and to my shame I do not yet know everyone’s name or I know the names and the faces but cannot necessarily match them up correctly (D’OH!).

The senior race started at around 11:00 am. The field of runners was as big as ever with 197 men and 142 ladies finishers racing against each other but separated in the individual and team results afterwards.

The course started with a gentle flat to downhill dash down the side of the field; navigating flattish terrain around a further two sides of the field before the water jump over the beck. Outside of this starting field the course took a large wide loop through waste ground, uphill on a very muddy and slippery farmer’s field and back round through some woods to the water jump and back around the perimeter of the starting field in the reverse direction to an uphill and finally flat finishing straight!

My strategy at PECO XC3 had been to pace myself, but I discovered that a slow start was my downfall as passing was difficult and I had achieved my worst placing this year. This time I decided to take up a starting position near the front and sprint to get a good start. I fully expected some faster runners to come past me and they did! The water jump was fine although photos show me approaching gingerly. The aforementioned muddy slippery farmer’s was hellish. I had run around the initial field to warm up and it was wet but not too muddy. In the race I cursed my decision to run in trail shoes and not to use my fell Salomon Speedcross 3s which have more grip. In reality I am not sure that this would have made much difference as everyone had caked soles by this stage and were “slip slidin’ away”: one step up and one slip back! After the muddy hill the downhill woods were a relief if rather tight and I found myself grabbing the odd tree to help me navigate a turn or two. I had been overtaken by quite a few runners as I paid for my fast start with some slower running mid race, but not too many passed me to cause me major concern. Sharon Woodruff and Sharon Williams both passed me along with ex-Abbey Liam Mealy, who now runs for Kirkstall and offered a grunt of encouragement.

Back over the water jump I gained my second wind and felt mentally and physically stronger knowing that the end was approaching. I pushed as hard as I could and found some extra energy to ‘sprint’ up the last hill and overtake a handful of people before sprinting to my best finish so far (96th man!). I was placed our 9th man (so did not count in the men’s team result), but was happy with my performance.

I stayed behind to help with the scoring and learnt the ways of The Force from Master Yoda Ward and Obi Wan Hetherington and their Jedi knights: Duncan Clarke and Iain Manfield!

Thanks also to Laura and Stella for their great camera work and photos (now on this site)!

Our ladies won the team race maintaining first place in the league and our men’s team was third on the day but also leads going into the final race of the season!

COME ON YOU ABBEYS! The Rebel Alliance needs you all to come along and run in PECO XC 5 on 3rd March at Boddington Fields (just a mile from our club) to defeat the Striders Empire!