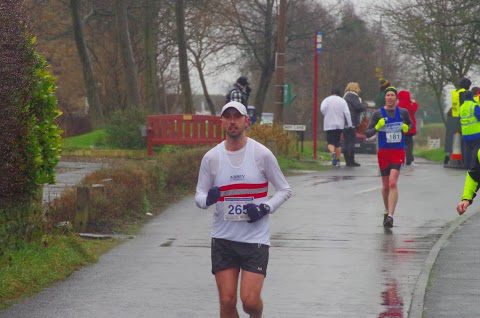 What on earth was I doing running a half marathon?! It was snowing and in conventional terms I hadn’t actually entered the race…

I’d heard two of my work colleagues talking about Liversedge and their training. It seemed that they revered this event because any mention of the race itself seemed to be accompanied with the puffing out of cheeks and the general nervous look of men thinking they’d bitten off more than they could chew. It’s not an easy race, it is quite hilly and February is not known for its fair weather. But this is a good race and could easily be seen as a race to target in itself, or as a stamina test as part of your spring marathon training.

When one of my workmates got injured they offered me their place. I’ve been off the boil for a couple of years and certainly hadn’t been doing any training for this distance. But despite the talk of a tough course and elevated expectation I relented and accepted the challenge. The reason do it – I’m new to Leeds and new to Abbey Runners, and thought that there’s no better way to be part your club than by turning out at a road race.

The course is quite scenic – apparently! At around the 12 mile marker there was a bench looking out over the hillside, but on race day what you would see in the distance was a mystery. The sleety snow at the start had turned to a mist of drizzle by the end which felt even colder. I had a peaked cap on but during the warm up my head was freezing so I found some plastic to line the inside of my hat. Even Duncan Clark wore a long sleeved top!!

If you run this next year, you’ll probably run your fastest starting mile of any half marathon! It drops early on to really get your legs turning, keep a steady pace on the following ascent and you’ll soon be well up on your schedule. Mine was 8 minute miles and was almost two minutes up after a mile. I set my target 8 minutes for the next mile and beat it, and again and again. Each mile undulates mostly with a bit of descent to balance the climbs. There was a water station at 4 miles which offered a choice of cups or bottles. It’s one of the things that shows that this is a well run race. I’ve never had a choice before, bottles are nice if you want to receive water like in a big marathon, but I just had a small cup.

Between mile 5 and 6 there’s a sign showing a hill with 14% gradient – don’t worry, this one is in your favour! At 7 miles there’s the climb up Thornhills Beck Lane. It’s very steep for maybe half a mile I guess, it was ‘enjoyable’. There are some nice lanes afterwards to get some breath back. I answered back with a “I hope not” to a kind but mathematically challenged supporter just before 8 miles who informed me that I was nearly at half way. My comment was obviously a sign of things to come.  I wish that I had a gel for a boost because mile 9 is a little sod! A long drag of a climb, horrible! I dropped back into a small group and we worked together to the top. That effort had lowered my reserves even further. It’s undulating all the way home from here. If you are feeling good on the day you’ll get past this final test, if not, then that bench at 12 miles will be appealing!

The race finishes where it starts and there was someone on the PA announcing my name and saying that I “looked in control”, in control of what I don’t know! So in summary, it’s a really tough challenge but is a well run local race with bigger race features such as chip timing. A long sleeved T-shirt and excellent cake afterwards capped a very well run race. It’s obviously popular amongst runners – this race can fill up by Christmas so enter and treat yourself to an early present in December.

Six Abbey Runners completed the course, I think there could be more next year.

2 thoughts on “Liversedge Half Marathon”