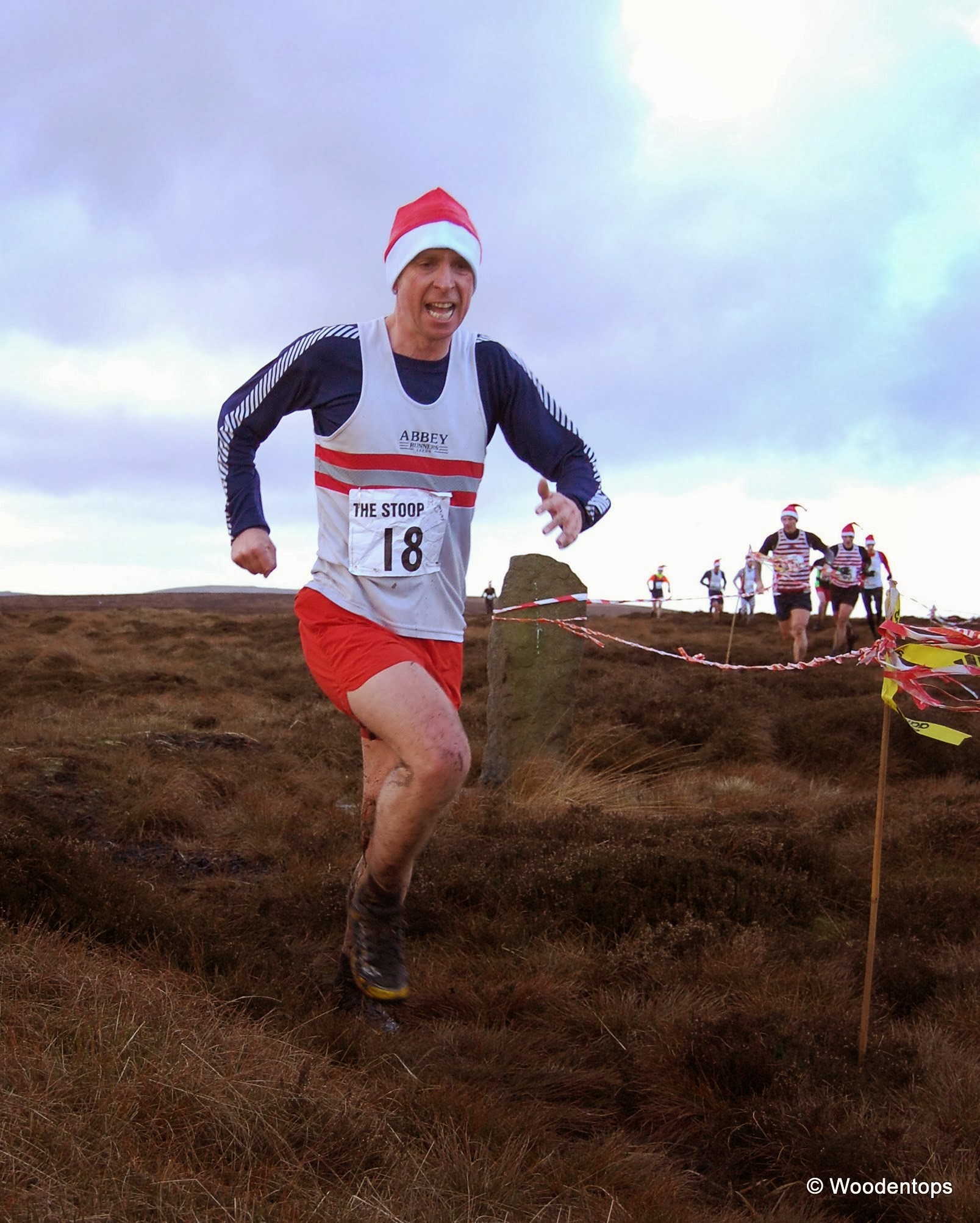 For the first time since I joined the club, the Stoop Fell Race didn’t clash with the Peco XC races, so since I hadn’t done it before, I headed over to Haworth for some Woodentops fell racing mayhem, with fellow Orienteer and Ilkley Harrier Jack Wood also tagging along for a lift. It was also to be my 100th race of the year.

My legs felt dead before we even started as we warmed up around the quarry due to having done a parkrun and a night orienteering race the day before as part of my stupid 100+ races in 2013 challenge (for more details see below – if you really want to know), and there was a cold wind that was blowing off the tops that made me glad of the obligatory kit requirement of having to wear a Santa Hat (provided) during the race.

After the slightly less than usual number of shouts of “GET BACK!”, we were told “if you don’t know the way, follow Tom (Adams)” – so on the shout of “GO!”, 401 of us did just that, at varying degrees of distance behind.

I’d had a look at the race route beforehand, but having not raced it, I wasn’t entirely sure which bits were runnable etc – Tim Jacobs had told me that this was one of the few fell races that he’d run every single step of, so this was presented as a challenge not to walk any of it. I therefore started too far back in the field and too steadily, as for the first half of the race I was having to surge past slower runners on the narrow tracks – not good on tired legs. Once on the top though, it was quickly around the Stoop standing stone and with the wind behind you, it was a fast descent back towards Penistone Hill, although again I got caught up with slower runners in front of me. I did know the run in towards the finish and so, despite tired legs and the slight bit of uphill, I just dug in and finished as fast as possible, finding quite a deep, wet hole to fall into en-route.

Mention should go to Dom, who had a phenomenally good run to finish 34th – once place ahead of Olivia Walwyn and beating some other very good fell runners in the process, although he would have been even quicker had he not slipped 400m from the finish and gashed his shin on something resulting in a nice hole….

New Year’s Eve brought the only serious way to end the year – a fell race. This time, the Auld Lang Syne, which as with all Woodentops races starts from Penistone Hill. This time it was Mike, John and myself that headed over together and a blustery, but not particularly cold day. It was nice to see the heavy shower that was forecast came over whilst we were sitting in the car beforehand, rather than as would be usual, just as we started to congregate for the start.

This race brought far more of Dave W’s usual “GET BACK YOU LOT” shouts as we lined up for the start. Unusually for me, I’d pushed my way pretty close to the front, as so got a pretty good start out of the quarry and down the road, which meant that I actually hit the first single track with room (it’s often quicker here going down the road to the junction on this race, even though it’s a lot longer). I got passed by a few heading up the Brontë Way, but was going well in general. I was cautious down the fields, as last year it had been very slippy, but this year it wasn’t too bad despite all the rain we had. The slog out of Sladen Beck was as hard work as usual and I struggled to get going again up the Pennine Way, and the group I’d been with started to work away from me here, but I just couldn’t keep with them. It remained a bit of a struggle all the way up to Top Withins Ruin, although I did have enough breath to have a very quick chat with Alistair Brownlee as he trotted past – he’d decided to run the route as a training run after starting the race (and giving us all a generous 5min head start) – it’d be great to run at that speed on a training run!

Once on the top I started to feel better and stretch out a bit more. I even took a few places back on the descent. Then it was all about hanging on to places back down the fast section down the track and the fields once again – this time the steep field we’d come up early was rather muddy and slippy (unsurprisingly really!) and it was about keeping one’s feet down to the beck. The slog back out up to the track again on the other side was ok.

Once I’d got here, I knew what was to come and just put my foot down along the track onto the Millennium Way – using those in front to work off and gain a few places in the process before over the road and back onto Penistone Hill to finish another enjoyable race and 104 for the year,

Post-race fun involved digging Sharon’s car out of a ditch where it had got stuck before the race….

For self-consistency purposes, a race by my definition is any event that publishes the results with positions and/or times. (Hence Parkrun = race, and a mountain marathon = 2 races as there are individual results for each day). 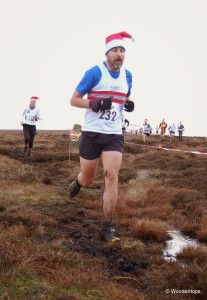 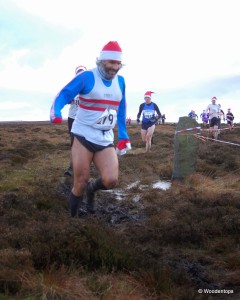 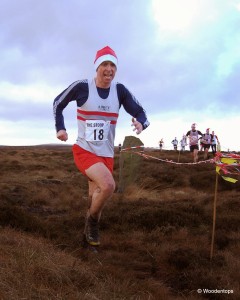 Last Sunday (8th Dec) should have been the Calderdale Way Relay (until they decided to go soft and switch it to May), and I had a hankering for a bit of Calderdale Winter fell racing, so I decided to head over to Mytholmroyd to do the eponymously named fell race that had switched places in the calendar with the CWR.

This is a race I’d never done previously, so that was also a good reason to head over, and make it my 94th race of 2013.  No other Abbeys in attendance, but there were friendly faces in the shape of fellow Airienteer, Ian Nixon, and Dave McGuire from Hyde Park and Shane Ewen from Otley.

The race starts with a lovely steep climb straight up Wicken Hill from Mytholmroyd centre. A locked padlock on a gate meant a slightly shortened start and a charge up the first steep climb to make sure that there wasn’t too much queuing at the first kissing gate about 200m in! The steep slog continued up through the fields and over stiles and then up onto the moorland to a road, before a shorter, less steep climb onto the open moor proper and to join the Calderdale Way on the shoulder of Cock Hill.

After a mile and about 270m of climbing, the gently undulating section across the top of the moor around Crow Hill was really nice. A nice, clear day allowed some great views down the valley towards Halifax and over Luddenden Dean with Ovenden Moor wind farm in the background. The moorland section was followed by a muddy, slippery, fairly steep drop down into Luddenden Dean and required concentration all the way down.

A mile or so of interminable farm track along the valley to Castle Carr gatehouse before the second major climb. By this point, my legs were starting to feel very tired and heavy after parkrun, hockey and a night-orienteering race on the Saturday, and the climb up the steps back onto the fell on Wadsworth Moor was a real slog. The run across the top wasn’t much easier, as the breeze that had been behind us earlier, was now a stiff headwind and it was head-down and keep pushing. I did manage to get my head up in time to have a look down the valley towards Stoodley Pike and Todmorden though!

The route now rejoined the Calderdale Way and followed it as it contours around the edge of the moor beneath Cock Hill and round to the top of Wicken Hill. Then it was a return down the steep climb back the way we’d climbed up onto the moor at the beginning of the race, again with some muddy, slippery slopes to contest with, before finally finishing back down in the woods at Mytholmroyd.

A quick dip in the Rochdale canal to wash the mud from my shoes and it was back to the Community Centre for a shower and cup of tea.

I’d really recommend this race to anyone who wants an introduction to Calderdale fell racing – it’s very much in a similar type of character to the CVFR Coiner’s race run on the other side of the valley – a combination of steep climbs and nice open moorland running. It’s also fully flagged, so unless the weather is really horrendous, navigation isn’t an issue either. It’s just a shame that it’s not still held in May – it’d really benefit from some drier, faster running conditions underfoot on the narrow trods, whereas the Calderdale Way Relay could benefit from the extra mud found in December!

Well,after four years of trying, we finally made the race,although it was in doubt until the last moment when I had a back spasm getting out of bed on Saturday morning, race day.

Lisa’s mum drove us the short distance up the valley to the race start in the hamlet of Capelulo. It was an uphill start which lasted for around 40mins ,then it levelled out at Penmaenmawr quarry,dropping down to a mile or so of running through bogs. A lovely,clear morning we were afforded fine views of Conwy Bay and Anglesey.

Indeed Anglesey is the only place we saw en-route that I can actually pronounce !  See fluent Welsh language speaker Lisa for the rest of ’em .Foel Lus,Cerrig Gwynion,Cefn Coch. yes exactly !

What I can manage to pronounce however  is ‘ steep donkey track’ and that is what the last half mile to the finish was. Please don’t let me stumble here and make an ass of myself on the donkey track.

The race was ten and a half mile, B category,tough without being too extreme for Lisa’s fell racing debut, and we finished it in 2hrs 09mins

Oh by the way,Lisa’s mum had recorded the Snowdonia Marathon for us to watch on the Friday evening and yes Andy we did see you !  and also a very fleeting glimpse of Richard too.

This year we will be celebrating the winter solstice with a run up Pen y Ghent and Plover Hill on the afternoon of Sunday 23rd December. The aim being to see sunset over Ingleborough from the top of Plover Hill followed by a pint in the Crown at Horton or a proper tea at the Golden Lion in Settle depending on what folk want to do. Open to all runners, fell or otherwise. The route isn’t particularly technical so suitable for novices who would like to take part in this annual Abbey event. This year there will be no sacrifice of virgins on the tops unless anyone is volunteering, but we could light a beacon. Contact Mike Ayers (Fell Secretary) if interested.

For full details on the league

If any races or results are missing from the league, please us the Contact Form to let Richard know as soon as possible.

The traditional fell-running way to end the year is pre-entry only again this year. Entry forms were made available at Withins Skyline on Sunday, and will be on the website (woodentops.org.uk) soon. Entries will not be accepted for the race before the 1st November (Dave usually puts early arrivals in a pile and forgets about them for a week if there are any spots left!). If you want to do the race, the advice is that you post your entry form on or as close to 31st Oct (not before!).