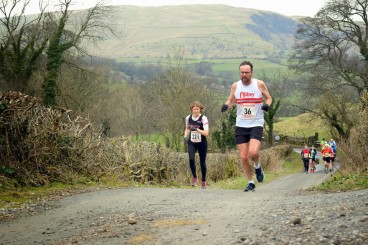 This is becoming a regular club outing; nine of us ran this year. If you haven’t tried it yet read on and find out why you should come next year.

Dent Village is miles from anywhere in the middle of Dentdale a really beautiful Yorkshire Dale. So it’s somewhere between Ingleton and Hawes and getting on for the Lake District.

500 or so runners swamp the village each year; it feels like the whole village community play host to us. They give up the primary school for the HQ and the Women’s Institute serve cream teas afterwards (included in your entry fee).

The run heads up the dale following the raging River Dee, turns round after 4 miles and back down the other side of the river for 8, you have an option to crash at Dent as you pass on the way back or continue for the loop of the lower dale and the whole 14.25 miles. Does that sound interesting? Well there’s never a dull moment really, rivers, hills, wilderness, farm houses, sheep, tractors, 4x4s, friendly Yorkshire folk cheering you on and taking photos, and there really is a field of cute and friendly Llamas just before the end. All this below the constant looming overview of Ingleborough, usually still snow capped at this time of year.  And the good news for City folk is you don’t have to run up it, or up any fells at all! It’s all on rustic roads with just the odd puddle and “undulation” to worry about. Just go steady on the ups and fly on the downs, you’ll be fine.

The weather is usually fine too; the odd year it’s been a bit rough. But it is beautiful in all weathers. I think it’s about sixty miles from Leeds but the journey is part of the fun. Go via the A65 and Ingleton, turn right just after Ingleton and there’s a gorgeous pass which will take you to Dent, single track, gates to open and everything.

The views are among the best in the world. Check out the dry stone walls – in places they are almost vertical up the sheer skree faces.

Honestly, if you like this kind of thing, try it.