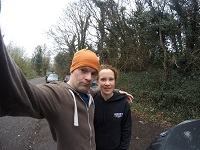 Last week was up and down. I’d gone down to London on Sunday night, after doing the Fellfoot Park Run , Grizedale and the Peco. So arriving into London Sunday night and needing to do some preparation for work the next day mean’t I got very little sleep.

Getting your runs in when busy has to rank high on my list as things that I find most challenging. Despite the fact that I always feel better after a spot of exercise – getting up after a solid days work is always difficult. It was with some happiness a lady I was working with this week fancied going out for a run the next day and was happy for some company.

Having company for a run is easily the most effective way of ensuring you get out the door and ensured that I got out for a 7:00 run along the Thames just as the sun was coming up and it lit up the skyline of Westminister.

Anyway having missed a few runs this week I should have been feeling great but for some unknown reason known only to the recovery Gods my quads still ache from last week.

So it was with some concern I lined up at Temple Newsam this weekend to put down a fast park run time. As I lined up I made a decision to go easy instead and focus on getting some great footage. I decided to start at the back and make my way through the crowd and try and capture some different angles.

I’ll leave you to judge the result but I’m pretty happy with it.

The issue I had was that in order to take all these different angles I had to remove my head cam, stop at the side of the road, race ahead to catchup with different groups and generally run myself into the ground.

The result was that I sprinted past people for them to see me stooped on the ground trying to get low lying footage. This sort of distracted people who were concerned that i’d hurt myself.

Anyway I managed to get some good slow motion action which looks good if I do say so myself.

Eventually after chatting to my various video victims I crossed the line – 51st – no idea what time but spent from the inconsistent pacing.

A couple of hours later Alison and I headed of to Ilkley on our bikes. I’ve just picked up a new road bike and wanted to give it a go. So we headed up to the Cow and Calf for a spot of Lunch. This absolutely destroyed my legs. The lunch was yum but the return 13 miles was a trial.

Sunday we’d planned a long run with a twist. In June we are running Cortina Trail – a 30 Mile race across the Dolomites. In order to get across the mountains you need a sensible run walk strategy – walk the hills mainly. In order to get ready for this we decided to try out a run walk strategy for our 15 mile long run this week. This was basically 9 minutes running followed by 1 minute walking. The idea behind this strategy  is that this enables you to recover during the run and should result in the ability to run longer distances as you don’t put so much strain on your body. In addition it should result in quicker recover times.

We managed to do the session as planned, the minute long breaks became more welcome the further we went. While the 9 minutes running seemed to take longer the minute rest seemed to be over in a heart beat by the end.

We’re thinking about taking this strategy to the Belvoir Challenge – which is a trail marathon we are doing in two weeks.

We’ll let you know how it goes and how are bodies recover.