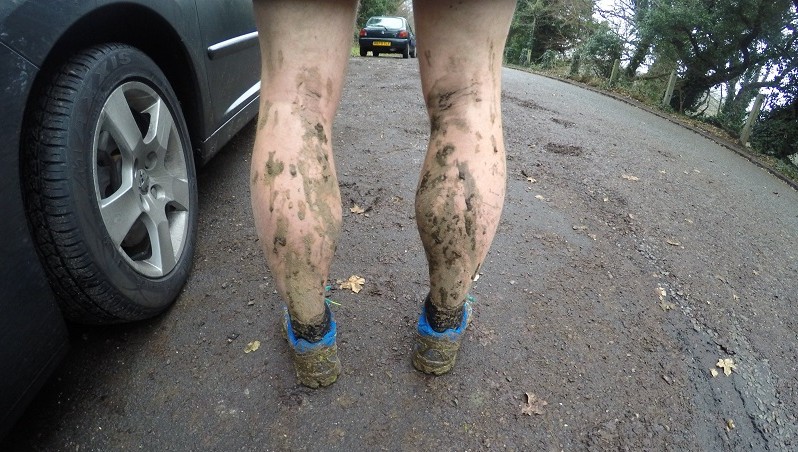 Here is the first of hopefully many of our weekly blogs about the new challenge Alison and I have set ourselves for 2015. I’m sure we’ll have a number of set backs on the way but hopefully we’ll keep going to the end.

Read our introduction page the Extreme 2015 to find out what it is all about.

In summary the plan is do 20 different Park Runs and 15 endurance/challenge events from hilly halfs through duathlons and marathons up to an ultra in the form of a thirty mile race in the Dolomites.

Leading up to January we managed to get some fairly decent training in around the Christmas period with a 14 mile run along the canal; the Christmas Day Park Run and Chevin Chase on Boxing Day. All of which gave me an opportunity to test out my new Christmas pressie – my GoPro camera. I’ve been using this with a head mounted harness and pretty happy with the results so far.

We decided to ease ourselves in gradually in January – with the following:

January 1st was an early morning after a fun night seeing the new year in with our friends Rachel, Dan, Bethany and Chris down in St Albans. Anyway – come the early morning after a wonderful 4.5 hours sleep we woke ready for the first of our two challenges; since we had twenty Park Runs to get through in 2015 we had initially jumped at the chance to do the double challenge (two back to back Park Runs). After a night of carousing though this didn’t seem such a great idea and I was pretty sluggish.

However after a cup of tea and a chat with Rae who had got up to see that we were ready we felt ready to go and jumped in the car and made off to our first run at Panshanger, located about 25 minutes from St Albans.

Panshanger is new event; this is only the 14th event they have run. I was pretty impressed with the organisation and how helpful and friendly everyone was. Panhanger is a single loop trail run in very picturesque surroundings; through woodlands, fields and a lake. I love single loops as it always feels easier to me when you aren’t repeating a section. We both set off at a decent pace considering the less then ideal preparation and were soon cruising along. Despite the recently cold temperatures we’d gotten lucky and it had warmed up to 8-9 degrees and there wasn’t any significant wind so we felt fairly comfortable.

The path was initially congested as the start of the run is quite narrow; but after a couple of hundred metres the field soon spread out and we found ourselves running along woodland trails, across fields and alongside lakes.

There were some slightly muddy parts but nothing too significant. This was one of the most scenic Park Runs I’ve done and would love to go back and do it again.  Both Ali and myself were still feeling the after effects of a cold we have been shaking off but somehow managed a decent run.

If you are in the area why not check it out

Once finished we jumped into the car and drove off back to St Albans for our second run of the day in Verulamium Park.

We met up with Rae, Dan and their girls and Bethany and Chris and their girls along with Kirsten for the 10:30 start. I had a minor hiccup at the start and managed to wipe out in the first 50 metres on the mud.

I recorded the two Park Runs and have uploaded to youtube – see below. The plan is to record as many of the events as possible this year.

Alison managed a new PB on the course (hooray!); ideally we’d both like to come back and try and run when conditions are better – was quite slippery on New Year’s Day but on a good day this is very flat/fast course.

Looking forward to the next event – which will be the hilly 15.5 mile coastal trail run in Anglesey on the 17th January.