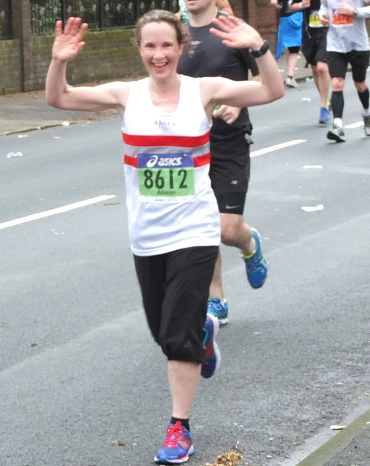 Two firsts for me this week. My first marathon, and my first race report for Abbey. Not sure which will be more successful…you decide.

So, on Sunday, I, along with 11 other Abbeys including my other half Mike, took part in the Greater Manchester Marathon, the so-called fastest, flattest, friendliest marathon in the UK. Since joining Abbey 3 or so years ago, I had heard constant stories of marathon agony and ecstasy (but mainly agony) and had been increasingly filled with respect for my new club mates’ feats of endurance and superhuman achievement. It slowly dawned on me that those I thought were Greek gods and goddesses were in fact, despite appearances, mere mortals too, and decided that I couldn’t truly call myself a runner unless I had undergone the same rite of passage and attempted similar feats.

So, my destiny was sealed. After a couple of false starts, the date and venue was set – Manchester, 6 April 2014. Little did I know beforehand how running a marathon takes over so many of your waking moments and quite a number of your non waking moments too. How far is long enough for your longest run? How could you expect to run 26.2 miles in a race if you had only run 20 or 22 miles in training? What was the wall, how would I know if I hit it and would I be able to run through it or was that game over? What was “race pace” and how did I know how fast to train? How was I supposed to have a life alongside training? Should I carb load, and if so, how much was too much? What was a good “fuelling strategy” and how would I carry my gels during the race (bringing a new interpretation to the term “gel implants”)? Did good tapering include running a cross country relay two weeks beforehand? The questions were endless. It was at times like this though I appreciated the words of wisdom supplied to me by those very same Greek gods and goddesses (“If you are running into the wind, make sure you tuck in behind someone big” (Peter Leach), or “Don’t worry about a time, just enjoy it” (Hetta, although I have to say the inner competitor in me couldn’t quite bring myself to follow that one to the letter), “Half a mars bar just before and you’ll be fine” (Duncan), “Ignore Mike and run your own race” (just about everyone) – well, I try to make that my general approach to life anyway so no issues there!)

Anyway, all that good advice led me to the starting line at 9am on Sunday, in a slightly muggy and overcast Manchester, but dry. I had been pretty well glued to the BBC Weather forecast for the last 5 days, watching the picture deteriorate from “sunshine and showers” to “heavy showers” to “wet and windy” so I had resigned myself to the worst but was pleasantly surprised. We had stayed over the night before and were very grateful for that when Martin Jones pitched up looking more than a little hassled, having been turned away from his pre booked car park and having had to find somewhere else (I thought when he said he had been via Eccles he had gone for a last minute bit of carb loading, and was starting to worry I had missed a trick!).

Nerves were hitting as I stood on the start line. Having ignored the sage advice of Hetta about not going for a time I stationed myself near the 3.45 pacing group (but well away from Mike, I was sensible enough to follow that piece of advice to the letter), with a grand race plan of “stick as close to these guys as possible and just hang on” and a backup plan of “don’t get overtaken by the guy on the pogo stick”. And we were off.

For those of you who don’t know me, I’m an accountant. I don’t tell many people that as it tends to mean I don’t make many friends. It also means I’m very boring and tend to stick to the rules. And I ran like a true accountant – even splits virtually from start to finish (with the first half only 1 minute faster than the second half), pre decided fuelling strategy (until my brain gave out after about 24 miles that is), stick to the 3.45 group. And, 3 hours 43 minutes and 43 seconds later, I found myself at the finish. Easy.

Of course, there was much more to it than that. I quite like big events, and there were about 8,000 or so taking part in this one. The atmosphere was amazing – there were very few bits of the route without spectators, I think most of the sweet emporiums of the North West must have sold out of Jelly Babies with the amount that were being handed out by the crowd en route. Some friends of ours had travelled up from St Albans to commemorate the occasion and provided much-enjoyed support at 9 and 16 miles, and much-needed support at 24 miles. I caught the occasional glimpse of a fellow Abbey amongst the competitors which was enough to keep the motivation strong, and by 18 miles I still felt amazing. Clearly I had followed the right advice on carb loading and tapering (thanks, Greek gods and goddesses). I was beginning to think that marathons were all a conspiracy by runners to make it seem as though they were tough, and that really they were a walk in the park. Hmm. I now understand what they mean when they say the marathon begins at 20 miles. It is amazing how quickly you go from feeling on top of the world to adopting a running style more like Simon Pegg in ”Run Fat Boy Run” (albeit without the hot pants). Luckily just at that point I was with the 3.45 pacing group so I was able to just focus on not letting them get away. By the time they did manage to pull a few metres away from me, I was well over the 24 mile point and was, as they say, “digging in” (which I believe is the short way of saying “hauling my sorry self along, millimetre by millimetre, looking like the living dead”). Yet again the support of the crowd was fantastic, the amount of unknown spectators, who, obviously seeing the harrowed look on my face (and my name on my race number) shouted “Come on Alison, you can do it” warmed the heart and gave that little boost of energy to the legs.

Eventually we turned the corner into Sir Matt Busby Way and saw the finish line in sight. I bounded gracefully the last few metres with the air of a freed gazelle (or at least that’s how it will live forever in my memory, and I’ll be destroying any evidence that suggests otherwise) until, at last, I crossed the line. I had to have serious words with my legs to get them to stop moving and believe the race was over, but stop they did and I made it through to the “recovery zone” where I was gradually reunited with my fellow Abbeys, in various states of delirium and depression. We dissected the race and shared our highs and lows, our PBs and PWs, our chafes and strains, aches and pains – in short, did all the things that makes being part of a club so great in these situations.

I never knew any hobby could be so painful. How long till I can do the next one…..?