The Abbey Dozen by Lynn Taylor

In the end the rain held off until most of us had crossed the line and the conditions were about as good as they get for marathon running, although perhaps a little warm for those acclimatised to long run training through the winter.

As a test of the Abbey team efficiency we failed at the first logistical hurdle, all of us being in the right place at the right time for a group photo, hence those who are Facebook fans will note there are some missing faces from the group shot. 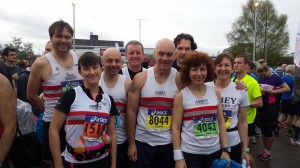 Nevertheless we all made it to the start line settled into our respective pens. For a race that is fairly new on the calendar the Manchester Marathon has grown steadily and now attracts 10,000 odd entries. I’m not sure how many actually raced on the day as we’re still waiting for a full list of results to be published.  From the green pen, where I was stationed with Peter, Laurence and Dave, making up the back four, it took almost five minutes from the gun time to crossing the chip timing mats.

The race is advertised as flat and fast and it was pretty flat – the fast I guess depends on your legs and your stamina.  The route takes you from Old Trafford (where some football team is based apparently) out through Sale and Timperley to Altrincham and back to finish just outside the stadium.  For large parts of the route you can see the rest of the field running past in the opposite direction which provides an opportunity to cheer on your fellow club runners or to keep an eye on where the competition is.

The local support is great, lots of spectators offering cheers and various treats to aid you on your way.  At several points there were musical interludes to distract you from the monotony and the pain.  There were plenty of drinks stations which offered water in handy little pouches – the first time I have come across these and I thought they were really good, much better than cups and bottles.  There were timing mats at 10K, 10 mile, half marathon and 20 mile points, although I missed any race clocks along the way if they were there.  I also missed a lot of the mile markers as I’m not used to these being in white rather than yellow and they just didn’t stand out – also I may have been looking down in dropped head mode for much of the race.

In terms of organisation, as always the marshals along the route were great, the baggage store was a bit haphazard with some people waiting ages to collect their bags and others being served immediately, no seating in the changing area (which presented a challenge almost as hard as the race itself!) and, as always, long toilet queues at the start furthering those pre-race nerves.  All in all I would recommend the race for those wanting a good marathon time and not wanting to travel too far from home.

And how did the Abbey team equip themselves. Well some excellent performances from first timers and from some of the more experienced in our midst.  Some people had a good day some people have had better days, but in all it was a great team effort.

Our chip times in finishing order were: