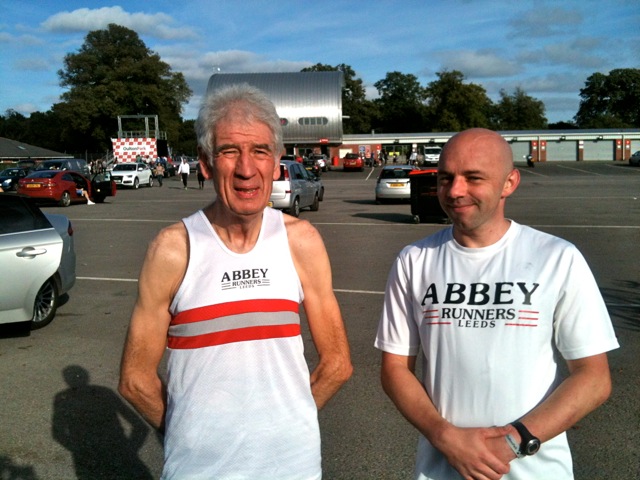 By Peters Leach and Persico

Earlier this year Peter Persico asked me if I was interested in having a go at a Duathlon.  To help with aches and pains, I have being cycling more and running less, so this persuaded me to compete in the Stockton Sprint Duathlon.   I got such a buzz from the event that I then began looking for another race!  I have always followed motor-sport and when the chance came to race at the Autumn Oulton Park Duathlon in Cheshire, it just couldn’t be missed.  Peter and I had a great time competing in this European qualifier for the Duathlon [see attached photo], and neither of us were last to cross the finish line!  I knew the likes of motorcyclist Carl Fogarty had raced at Oulton Park, but actually Stirling Moss had also raced on this hallowed track.  We are now hoping to race a Duathlon at Silverstone in 2014, so if you own a bike please come and join us!

Earlier this year, I entered my first duathlon, this being the Stockton standard distance duathlon [see my earlier report].  Having had tremendous fun with this challenge, I was always looking to do more duathlons.  So, when the suggestion came to enter the Oulton Park duathlon on a smooth track, I happily accepted the opportunity [how could I refuse?].

Since the first duathlon, I had worked on my cycling as well as general strength and fitness, and at times joined Peter Leach and a few others on various cycles.  When I arrived at Oulton Park, it was beginning to warm; the sky was quite clear and the sun was shining.  It turned out to be a warm day, and so, despite bringing my Abbey Runners top, I chose not to wear it for the event, instead keeping it visible in the box by my bike.  Unfortunately, I forgot any sun cream, so caught the sun, and had a record of my race number on my upper arm and calf where I caught the sun round my race number stickers.  I had no idea exactly what the course would be like, only that it was going to be a smooth track, which would be a welcome change from all the potholes we have encountered on our cycles.

The duathlon consisted of a 2 lap run, a 9 lap cycle, finishing with a final 1 lap run.  Each lap was 4.31km or 2.69miles, meaning run 1 was 8.62km [5.4miles], the cycle was 38.8km [24.3miles], and the final run 4.31km [2.69miles], making a total distance of 51.73km [32.4miles].  During the first lap, I discovered that there were 3 quite challenging hills [you may get an idea from one of the pictures below]. I don’t know how I was smiling for the camera during the first run at the top of the 2nd hill.  About 100m after the 3rd hill was the pit lane where transition occurred.  This made it an extra challenge because we were basically finishing up a hill with a short flat run to the actual finish line.  Our finishing pictures seem to indicate the extent of the challenge!  As Peter has written, we had a great time at this event.  I was quite pleased with my performance because , although about 2miles shorter than the Stockton duathlon I had done earlier in the year, I was quicker by about 45 minutes.  In addition, I had done a 10km obstacle race the previous weekend

I would definitely recommend this duathlon to others due to the great atmosphere and great organisation, and I do plan on entering it again next year, as well as looking at other options, including Silverstone as Peter has mentioned above.  Any other takers?