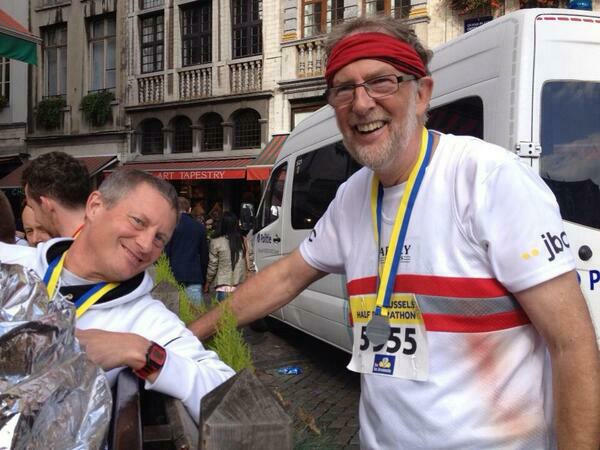 In June this year I was visiting my daughter Kate in Brussels when, after plying me with several beers, she entered me for the Brussels Half Marathon. As she had also entered I felt it was my parental duty to support her by turning up to the start line on Sunday 6th October, even though a knee problem had prevented me from running throughout August and part of September, so that I was not fully prepared (excuses!!).

Brussels of course is not on first acquaintance the most attractive of cities, but the route was pleasant passing by the royal palace, expensive and fashionable shops, and leafy suburbs. But the pièce de résistance was the final descent into the City Centre and the finish in the world-renowned magnificent Grand’Place (or Grote Markt in Flemish).

The previous Saturday, at the Abbey Eccup trail Event I had learned from former Abbey Runner Andy May that he and 20 other Valley Striders were taking part in the same race.  So the responsibility for holding up the Abbey flag fell on my shoulders alone.  I’m sorry to say my time was not good enough to worry the Striders who were to be seen quaffing flowing mugs of Belgian beer not far from the finish.

The Striders hold an annual trip to a race overseas. Should Abbey ever decide to adopt this custom and choose Brussels, I can show you some suitable watering holes.