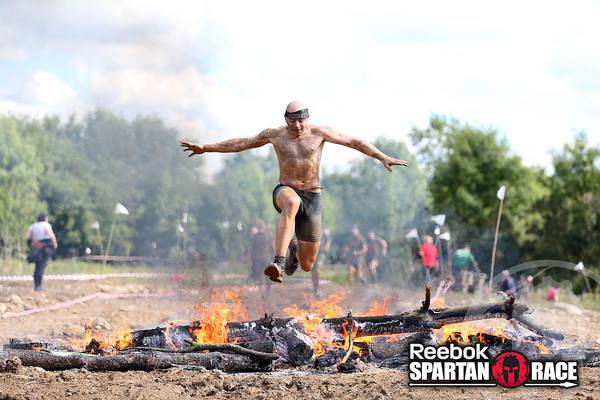 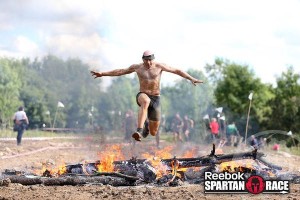 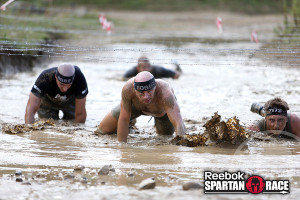 For those unfamiliar with the Spartan events, they are described as an event of pure primitive craziness [or in the words of John Ward, “Ridiculous”]. Basically, they are obstacle runs. The Spartan Sprint is roughly a 5k distance [but actually slightly longer] with up to 25 obstacles, and this would be my second time of doing this event, but this time I had convinced one of my younger brothers to run it as well [the only person I’ve managed to convince so far].

The run took place [as it did the previous year] just out side Ripon at the back of the army base. This time, I had opted for a later starting wave of high noon since my brother was coming along. On arrival, there was music playing and a very energetic atmosphere, with all types of people milling around the general area. After a quick and painless registration, I too wandered around enjoying the atmosphere whilst waiting for my starting time, and sneaking in a bit of water and a banana. Just before midday, we moved to the starting area where many of us were warming up, and then came the psyching up courtesy of one of the race officials dressed in Spartan gear. This basically involved shouting at us not to quit, that we were all in it together, and to enjoy ourselves. I don’t normally go in for all this sort of stuff and would have been happy enough to just set off, but actually, it was quite invigorating.

Anyway, when the hammer fell, we all set off. I decided to immediately attack the first bit of trail through the trees to get some space. After running through some trees and jumping over fallen branches, etc., I came to a very steep descent. Once at the bottom, we turned and then headed back up the steep hill. We had to do this 3 times along a horizontal plane. It is fair to say that it was quite tough, and lots of people appeared to be struggling even at this early stage. My brother had fallen slightly behind as well, so, since we had planned to keep together, I held back for a short while so he could catch up. As soon as he got to the top of the last hill though, I yelled at him to keep going; he was unable to answer due to trying to catch his breath. After a bit more trail-type running, we came to the first 10-foot fence over which we had to climb. After a few of these, I had again pulled ahead of my brother, so not wanting to spoil my run, I left him behind and pushed forward.

In order to save time and space, I’ll basically just list some of the obstacles that we encountered:

Should you fail an obstacle, the punishment is 30 burpees before you can progress. You don’t get a second chance, and the slightest slip or mistake, and the marshals pounce to demand the burpees. I suppose with the amount of people around, you may get away with a few less than 30, but where’s the fun in that?

I was having so much fun [as you may be able to see from the smile on my face while jumping over the flames], that after a while, I began to catch up and overtake some of the runners from the wave in front of me, which gave me a boost. However, this also caused me some delay due to the nature of the conditions at times making passing somewhat difficult. Just before crossing the line, you have to get past 2 people with rather large pugil sticks whose job it is to give you a good whack. I again decided that it was best to just run full on and get it over with, and don’t remember getting too many hits [or is that a consequence of the hits I sustained?] Upon crossing the line, I got a medal, a cup of water, and a protein bar. I then waited and watched for my brother to cross the line. We then had a bit of a chat about what we’d just done, including our favourite and less favourite obstacles. I think my least favourite obstacle involved the rope pulley since I got several rope burns on my forearm due to the thin muddy rope and my muddy hands.

The organisers advise that you bring spare clothes to change in to after this run, but interestingly enough, don’t provide any type of changing facilities. This results in a swift change in the car park area or somewhere in the gathering area near registration. However, they were thoughtful enough to provide “unheated water” to help remove some of the mud. Basically, “unheated water” meant cold water.

I fully intend to do this particular run again, and make sure I do the longer distance versions [7-8mile and 13mile runs] next year, and pick an earlier wave. Who knows, maybe I’ll have convinced others to join me for at least one of them. I think it is good to do these type of runs not least because it reminds you that you can’t really complain about a steep road hill when you have to carry heavy objects up muddy hills. If anyone does catch me complaining, then perhaps they would be kind enough to remind me of what I have just written. I’ve got at least 2 more ‘ridiculous’ runs this year that, no doubt, people will hear about. In the meantime, I’ll carry on running [and cycling], and occasionally you may see me throw in a few press-ups or burpees; if so, feel free to join in!