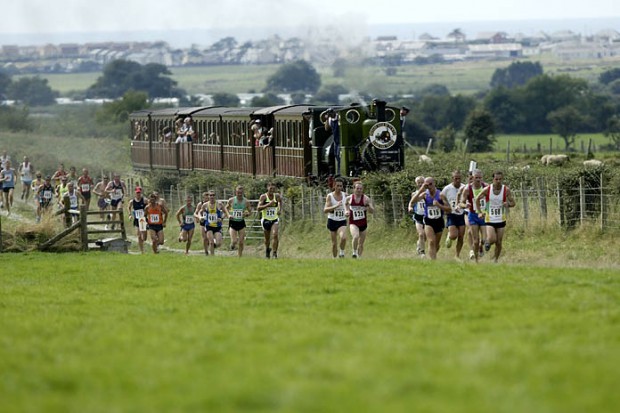 You race against a steam train…literally…as well as 900+ runners.

You start the 14 mile race adjacent to the railway station, and the runners and the train are both started by the train whistle.  You have to run the course and get to the finish before the train pulls into the station.  Good runners can usually beat the train within around 1 hour 47 mins.  Over a 14 mile trail race, I knew I would be pushed to beat it, but I was going to give it my best shot.

Now, it may seem a long way to travel to run a race, but Liz Willis and I happened to be in the neighbourhood at the time.  Liz had run it in 2007 with a few other Abbeys.  She ran it in 2 hours 38 mins back then and was keen to beat her time.

After a mile of road, you find yourself on a mixture of tracks and fields, often alongside the railway line itself.  I could see the train at the half way point and felt pretty good that with a strong second half I was in with a chance.  Unfortunately (here come the excuses), the weather made a major turn for the worst and I was soon running into horizontal rain and blowing gales along a sloped path that became narrow and treacherous.

I had forgotten to put my contact lenses in and was running in my glasses.  The rain was so heavy and the sloping path so narrow that I had to take them off ‘to see’ where I was going.  Eeek.

I discovered that the second half of the course is significantly tougher than the first with steep climbs (that you had to walk), lots of thick mud (although maybe not quite WYXC 2012/13 standard) and jumping over (or running through) overflowing steams.  Clearly to beat the train you have to be ahead of the train at the half way point!

I came at 2:03 (the train did 1:48 but it have the benefit of coal, steam and an easier route) and Liz smashed her previous time by coming in at 2:19.  Shame about the weather but it is in Wales I suppose.  And it’s August.

It is a great concept in beautiful surroundings, and would make a great Abbey camping weekend next year!  Any takers? 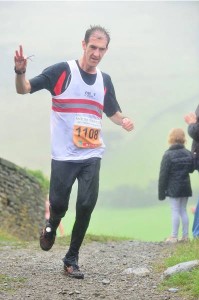 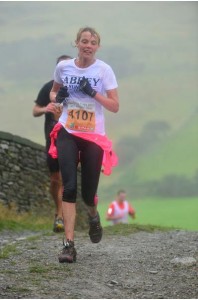