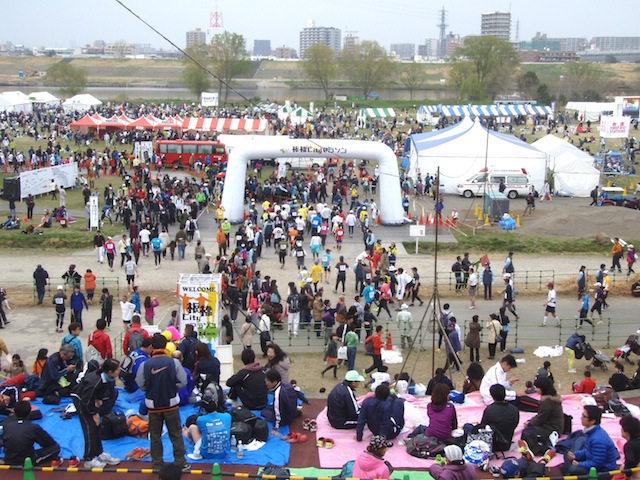 Some of you will enjoy Spring Marathon such as London Marathon and Edinburgh Marathon. Before these races I have already run a marathon in Tokyo.

This race is not “Tokyo Marathon”, which is the most famous race in Japan. “Tokyo Arakawa River Marathon” is held at the bank of the Arakawa River in March: full marathon (15,000 people) and 5Km/3Km/kids (2,500 people).

The Arakawa River is one of the principal rivers in Tokyo and the length is 173 Km. The bank is very wide, and it is used as baseball grounds, football fields, golf courses, parks and walking paths as public spaces.

I had run this race four times from 2004 to 2007 before coming to the UK. I like this race, because the venue is the nearest to my house, and there are 15 food stations, which serve banana, raisin, “onigiri” (rice ball), “an-pan” (bread containing sweet bean paste), and sherbet (ice snack, only at the point of 35Km). Also the race is still popular though Tokyo Marathon has been held since February 2007. Of course I want to run Tokyo Marathon again, but now it is very difficult because the entry rate is more than ten times.

My club members participated in other races, so I was alone. On the day it was cloudy, the temperature was from 8 (9:00 am) to 11 degree C (12:00 pm), and there was almost no wind. This means a good condition for runners. The start time was 9:00 am, and I arrived at the venue at 8:10 am. There were already full of people. After I queued for toilet, changed clothes and checked my bag, I had only five minutes to start.

During running, I saw over 20 long bridges, heard loud cheers “Ganbare! (Go for it!)”, and took at each food/water station. I found a strange man. He whooped to us many times, “Don’t hurry up! Exhausted soon!” from 10 Km to 20 Km point. At last he speeded up, overtook me and repeated to shout, “I’m going! I’m a man!”

My time was 3:49:34. It was 18 minutes slower than Edinburgh Marathon 2010. In Edinburgh I had energy enough to put out a last spurt, but this year I faltered out at the finish. I must say that a gap of three years was too long. But I feel happy that I have been getting away from fear of calf muscle pain, which means “psychological trauma”. I had suffered from it for two years in the UK.

I am like a countryman. I am still a bit hesitated about a lot of people. The population density of Tokyo is higher than that of London. Also the scenery is different. I have seen the background scenes in the Abbey Fb and HP. Even in winter the color of the UK (Yorkshire) is still “green”, while that of Tokyo is “pale yellow/brown” in winter.

This month is warmer than normal, and cherry blossom trees have bloomed seven to ten days earlier than usual. After the marathon I saw “Hanami”, cheery blossom viewing party at the park near the venue (Please see my post of Abbey Fb 26th March). While I was just remembering that yellow daffodil is March flower in the UK.