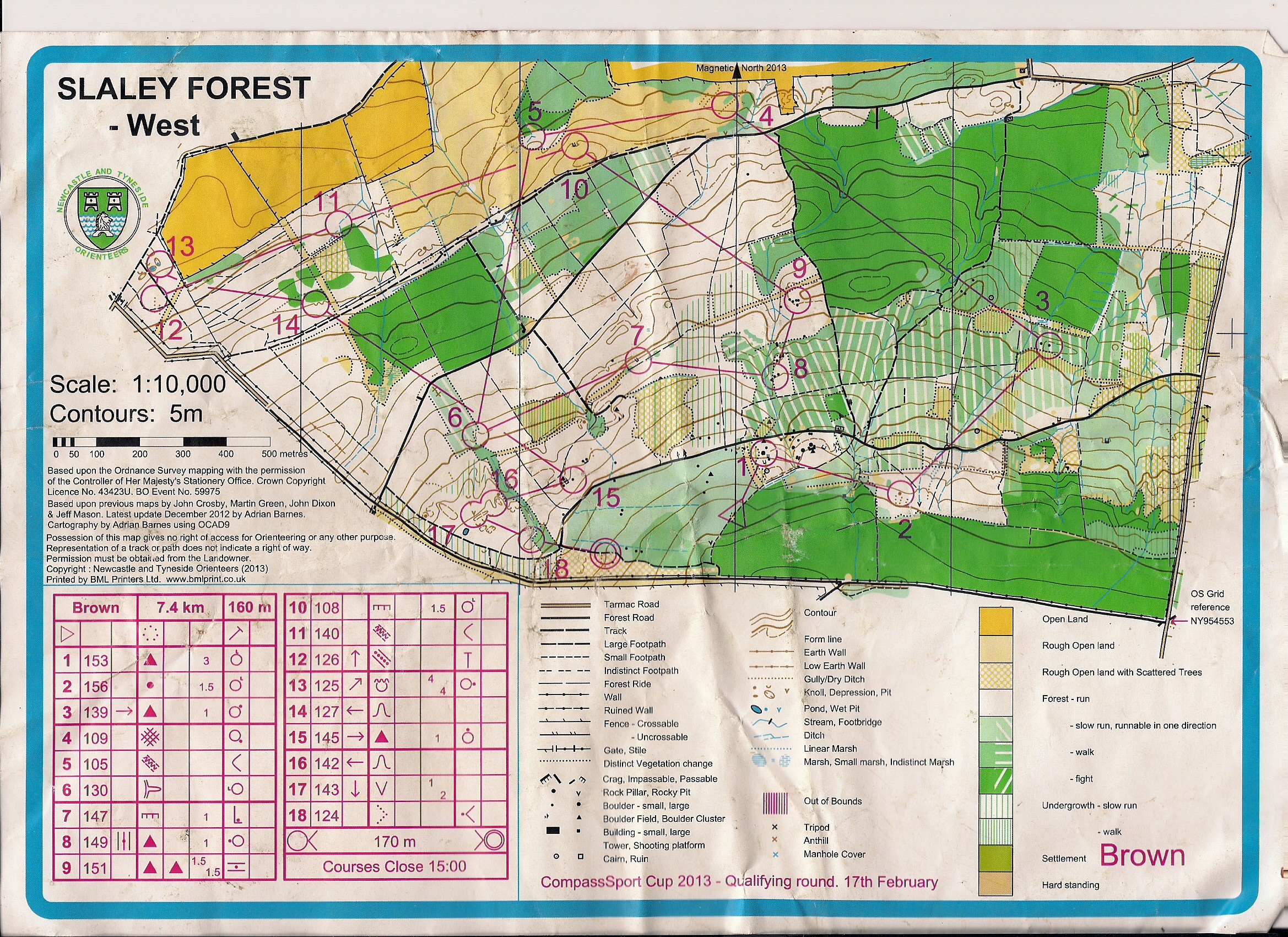 A few of the more eagle-eyed amongst you may have noticed my absence at the last PECO XC (incidentally, the first I’ve missed in over 3 years), and so by way of an explanation, I offer you a race report! Most of you will know that in addition to running for Abbey, I am also a member of the local orienteering club, Airienteers, which covers Leeds, Bradford and the Craven district into North Yorkshire. We’ve got quite a diverse membership and include a lot of runners (in particular fell runners) from local clubs, including a P&B, Valley Striders, Leeds City, Baildon, a large enclave from Ilkley, and also a few Abbeys.

Last Sunday was one of the big events of the orienteering calendar, especially for clubs – the CompassSport Cup. This is a national competition, where clubs compete against one another, rather than as individuals. Within the Orienteering world, in terms of importance, the final of this competition is perhaps on par with the National XC team champs or the National road relays in the running world. And as a club, AIRE are the current national defending champions.

Last Sunday was the qualifying round to get through to the final in October (so think of this as being on the same level as the Northern XC champs). In orienteering, rather than an open race on the same course, usually runners are split according to your category (age and sex), so that you are competing directly against people only in that category. We were short of runners on the M21 course (Brown), so I was asked if I could run this event because scores across a range of categories go together to make up the team score in this competition.

For those who don’t know where Slaley Forest is, it’s in Northumberland, just south of Hexham, or about 2hrs drive from Leeds. Fortunately, it was a nice day and I drove up with my fellow AIRE orienteers Carol and Pauls. After a chat and ambling around the assembly area for an hour or so in the sun, I jogged down to the start area as a warm-up – leaving it a bit tight as I was called up for my start just as I arrived!

I was running the Brown (long) Course, advertised as 7.5km (straight line distance between controls) with 160m climb, which sounds quite short until you realise that the the optimal route (rarely taken by the likes of me) is usually around 20% longer than this and the terrain you are slogging through is not always conducive to fast running. Slaley was particularly hard going it has to be said, being fairly boggy underfoot in places, with large sections of cleared forest, leaving bumpy open terrain full of nasty brashings and large sections of thick impenetrable conifer forest (dark green on the attached map) which was truly vicious – most of us came away with a scratch or ten where a tree had decided to attack us!

I was, by far, the slowest AIRE runner on the Brown course, so my aim was just to try and stay within 10mins of a couple of my clubmates. With this in mind, I set off steadily down to control #1, quickly finding out that the white “runnable” forest wasn’t going to be necessarily all that runnable! My rather silly route choice to #2 ended up meaning I had to tangle with the nasty dark green forest and ended up covered in scratches nice and early, but once through, I was quick enough to the control. Controls 3 & 4 were straightforward, but with a detour to the wrong erosion gully. An error in judgement to 5 led me hacking my way through the rough, ankle-turning, hole-ridden open section, and I should have cut up to the path and then back in – it would have been easier. 6 was easy enough, but I made a big mistake on 7, losing nearly 5mins as I ended up too far N of the control, before realising and looping back (I’m blaming some errant mapping as the clearing shown SW of the control wasn’t there and it threw some other people as well). 8 and 9 saw further mistakes, as I got slightly disoriented going into and out of a heavily forested section. 10 was again straightforward, although I could have saved maybe a minute with a better route choice in hindsight.

At this point, I was caught by a later starting clubmate. Following people at orienteering events is very dangerous – you often have no idea what course they are running and can lead you completely astray. However, I knew that Steve was on the same course as me, and even though I wouldn’t be able to keep up with him for long, he would prove useful for locating a few controls, although he actually overshot the way off the path into 11. At the same time we also caught another runner on our course, making 12, 13 and 14 straightforward (using other orienteers is a perfectly valid tactic!!) and we were also caught by Pauls at the same time, leading to a bit of a chain developing.

As in fell racing, the uphills spread people out, and so it proved between 14 and 15, and I was starting to tire quite badly at this point, although I caught Pauls halfway up as he’d made a different route choice to me. 15 was straightforward, as was 16 after a minor check at a control on another course, but 17 threw everyone around us (including a confused looking Steve who was coming back the opposite direction as we headed out of 16) – everyone headed to the spur about 50m further West, thinking it was the one by #17 on the map. It was quickly realised by everyone where we were and corrected the mistake, but it cost me another minute or so  – big mistakes on short legs are very costly. Then it was plain sailing to 18 and the finish.

I finished just behind Pauls who had overtaken me on the last couple of controls and jogged back to download, where my most of my clubmates had put in their usual good performances, although everyone said they’d found it hard going.

I’ve attached the course map, but haven’t put my route on. If you want to have a look, you can find it (along with other people’s better choices!) by clicking here You need to choose the brown course and then select the runners you want to view on the RHS – those with a “*” against their name have submitted routes (GPS means we’ve uploaded a Garmin trace). You can also have a look at the other courses that people did on the same link.

So, a less than perfect run for me, finishing in 78:58 – I think I lost about 10-12mins with silly mistakes (mainly from a lack of concentration!), but ended up 14th on my course (results here – although they need correcting as the Winner shown actually miss-punched). More importantly, it looks as though AIRE has won the event and so qualified for the final to defend our title, although we’re waiting on the official results. Unfortunately, it looks like there’s going to be a clash between the Fell Relays and the final date, so I won’t be able to help them out in the final, as I’ll be Llanberis (provided Abbey can raise a team this year!).

Hopefully, I’ve piqued the interest of a few of you and if you fancy giving orienteering a go, AIRE have plenty of local, low-key informal events. Have a look at events on the AIRE website and if you’re interested, drop me an email or alternatively, just go and have a go! The “level D” events are particularly good for newcomers!