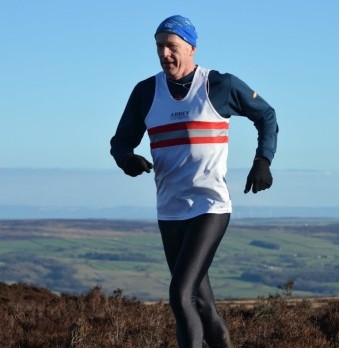 For those of you who don’t know, it’s an LDWA event starting and finishing in Guiseley, along a route taking in Esholt Woods, Tong Park, Baildon Moor, a tour of the various parts of Ilkley Moor, then Burley Woodhead, Menston and finishing with a “lovely” climb up the Chevin and a run (stagger?) back down the hill to Guiseley. Since it’s an LDWA event, there’s always lots of cakes and goodies to be had at the various checkpoints! In fact for £9, it’s one of the best value ‘races’ around!

Although not officially a ‘race,’ it’s a great early season training run, and one people should definitely consider if you’re doing a spring marathon or long fell race (such as the 3P) – it’s mostly trail, with some road sections and just enough of the rough stuff to get your feet a bit wet and muddy.

This was my third attempt at this race, and given my current lack of fitness, I wasn’t expecting a lot – I was just treating it purely as a long run and therefore set off a steady pace. I was therefore a bit surprised to be running alongside Brian Goodison through Esholt and up to Baildon Moor, before he explained he’d not run much throughout January.

The drop in temperature over Friday night meant that the conditions for running were good (although not as good as last year, where the ground was rock hard!), with some of the sections hard underfoot, but soft enough not too be rutted and also frozen puddles and streams over the moors (which made a few sections slightly tricky).

Brian took a better line than I did off Baildon moor (still haven’t got that bit quite right!), and I resolved to keep him in sight for as long as possible. Over the moor, a cold breeze was into the face, but the nice clear day and views over Wharfedale were great compensation. Apart from a slight detour at Piper’s crag, where they’d moved a checkpoint without telling anyone (necessitating an out-and-back of an extra quarter of a mile or so), the next section was uneventful and I just kept it nice and easy through Ilkley bottom and up past White Wells and into Rocky Valley, where I surprisingly caught Brian again, who was finding the lack of miles were taking it’s toll. We stuck together over Backstone Beck and onto the moor edge, before I stretched away. Then the fast down the hill into Burley Woodhead where I caught Dave McGuire from Hyde Park who was also finding the going tough.

Menston is always difficult. It’s a stretch of about a mile of tarmac road and ginnels, which is hard on legs that are tired after a long downhill section, and I started to get a few stomach issues, and took the climb across the fields to West Chevin Road very easy. The long run down the road before the climb up the Chevin is also difficult and I forced myself just to keep going as fast as possible up the steep hill, which ended up as as a very steady walk! Then down the final run into Guiseley, I started to pick up again and managed a decent run down to the finish in the School.

I ended up running 3hrs 29mins and 50s by my watch, a bit slower than last year, but given running conditions being slower and my fitness, I’m pleased with that, as it was faster than I expected to be. I also felt much more comfortable than on the previous two attempts – the big clue was that I didn’t go white immediately after I finished!

Brian followed me in about 5mins later, with Tim Jacobs coming in at 4hrs 6, and he said he’d found the going tough from White Wells onwards (not nice – I’ve been there and it’s a still a long way back!). Rachel Findlay Robinson (of Dark Peak, but who has been running with us recently) breezed round looking comfortable to come in just after Tim.

The race was won in 2hrs 43mins by Richard Pattinson of P&B with Dave Wilby of Ikley in 2nd (2hrs46). Jo Waites of Calder Valley was first lady in 3hrs9mins.