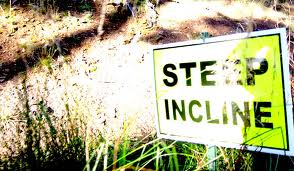 When I entered Kielder Marathon back in March 2012 there was one question that seemed to be floating around the running forums – how hard are those hills? The answers were always the same, ‘mostly short and steep’, ‘a few big ones’, ‘adds 25 minutes to your PB’ even the official course guide doesn’t mention THAT beast of a hill at 21 miles.

I found out the hard way. I had trained specifically with this race in mind for the previous 4 months. I had run up and down hills, steep long hills, regularly as part of a hill training regime.  I had run fast half marathons as training runs, my taper had gone well and I felt the fittest I had ever been. I thought I was prepared.

I holed up in “Le Premier Inn” in Carlisle the night before. I was on my own for this one thinking that remote location, adverse weather and two young children might be a recipe for disaster (I couldn’t have been more wrong – very family friendly and sunny conditions). Setting off at 7am from Carlisle having to scrape off thick frost from my car and the fog was a little ominous although the forecast was for plenty of sun and 8C – perfect conditions. The drive across the A69 from Cumbria to the event car parks in Falstone, Northumberland was spectacular with amazing views.

There were some delays in getting all the athletes and families onto the buses to take them the 5 miles to the start and as a result the race start was delayed by 15 minutes. When we eventually arrived at Leaplish Water Park the organisation was outstanding. With the long wait, bumpy 5 mile journey and just above freezing temperatures, every over hydrated runner was now walking like they had just graduated from the Ministry of Silly Walks whilst trying to locate the toilets. Satisfyingly there were more toilets on display than at Glastonbury and this set the trend for the day – Steve Cram and his team know how to organise a marathon. The atmosphere was unlike any race I’d entered before. There were 2 radio DJ’s doing a light hearted radio commentary at the Start/Finish for all to hear. They were bantering with runners, making jokes and creating a good humoured atmosphere. Even the legendary Tony the Fridge was running hoping for a sub 5 hour time. Steve Cram was calmly walking around with his team ensuring that all the athletes were going to be able to make the start in time. Baggage drop was efficient and gels and drinks were freely available. As a side note this marathon was only £40 to enter, very good value for money compared to the entry fees to some of the ‘bigger’ marathons and the goodie bag at the end is fantastic.

If Carlsberg did race starts this would have been one of them.  Just under 1200 of us made our way to probably the most laid back start ever. No pushing past or movement really, pick anywhere to stand and without any real ceremony at 10:30am the klaxon was sounded and we were off. The first mile or so is an uphill loop on tarmac out of the park and back around to the Start/Finish section before heading out onto trail for the rest of the race.

With the painful benefit of hindsight this was, in footballing clichés a ‘game of two halves’.  I flew round the first half powering up the hills, happy that my hill training was paying off.  The hills were hard in places, some longer and steeper than others but perfectly doable. I was even getting giddy at the idea of a 3h 35m finish time – yeah right!

The whole race is marshalled and marked professionally. There are mile markers, quarter mile markers and even kilometre markers every 5K. There are more drink stations than you could possibly need and the marshals were genuinely willing every athlete past with their encouragement. At one of my lower points, running with head down and face grimacing a marshal crouched down to look me in the eyes and said “Come on keep going, you can do it!” There is even support from the yachts that where moored in the middle of Kielder water pipping their horns in support and shouting enthusiastically as all runners go past.

It was when I arrived at mile 17 that my ever tightening calf’s began to painfully and randomly cramp. They felt like they were going to explode and I could not even envisage slow jogging to the end. Even my Achilles started to feel like it was cramping and god only knows what the pain in one of my quads was about. The mental part of the race had begun so I took on more isotonic drinks and ate some sweets that contained potassium and sodium to try and stave off further cramps. You hit Kielder Dam at mile 18, a metaphor perhaps, and the hill promised shortly after, cruelly doesn’t appear until around 18.7 miles. For the first time ever in a race, half way up I started to walk, all be it a fast walk which felt completely wrong but also necessary. Other runners had started tactical walking and at the sign of the hill flattening out I set off running again. I hit 20 miles but by this stage it was now just a case of finishing at whatever cost. I couldn’t face anymore of those steep incline signs!

The banter and kindness spurred everyone on in those last 10K. There were around 10 of us in a group that were constantly passing each other as we tactically walked some hills, ran others doing just enough to get to the end. Even the smallest incline felt like an extreme effort.

You know you are nearing the end when you see the sign ‘800m to go’ as you enter a forest for the final push. I didn’t though as my head was such a mess by this stage that I read it as ‘Boom to go’ thinking it was some kind of motivational message spending the next 400m trying to fathom what it meant! They even throw in a cheeky hill for good measure but by this stage you can hear the DJ’s over the speaker system and cheering crowds clapping home runners. With 200m to go you leave the dark depths of the forest and pop out into the bright sunlight of the finishing straight with people cheering, everyone high fiving you as you go past. The commentators gee the crowd up, they shout your name out and congratulate you which will long live in the memory. It’s a pretty special finish.

The last 10K had taken me 58 minutes. I was broken, sore but smiling. I had been lured in by the first 13 miles and taught a lesson in those last 9. I felt a bit down that I had resorted to walking but despite the pain I didn’t hate running; in fact I wanted another crack at it. Other runners were also bewildered at the end – everyone was saying the same; thought they could cope with hills in first half and then wiped out in the second.

It was only later when the results came out that I discovered that I was not alone. There were some fit individuals who could run the first and second half evenly, some even negative splitting. Most runners however like me were running the second half 20 to 25 minutes slower than the first. 193 runners either don’t finish or miss the cut offs. It’s a tough run.

The tag line ‘Britain’s most beautiful’ marathon is obviously subjective but it certainly has incredible views throughout and good quality trail all the way around. The sun also helped. The key factors to this marathon though are the warmth and friendliness of the people of Northumberland and the excellent marshalling. I’d thoroughly recommend it.